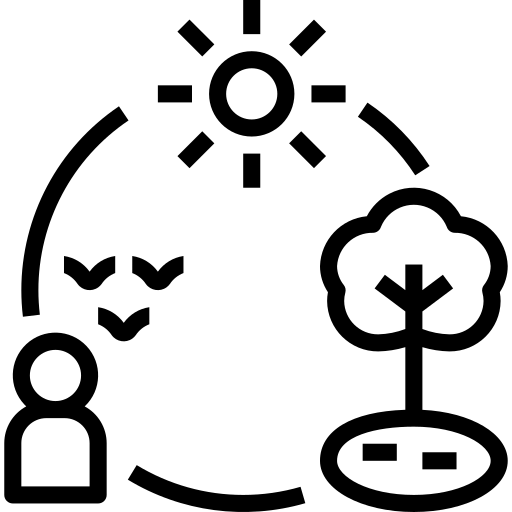 Are Earth and its ecosystems inherently stable, with change arising from human disturbance, or are they more dynamic over time?

It’s common to assume that the natural world tends toward equilibrium and balance outside of human influence, but research into ecosystems suggests a more nuanced picture. The Ecosystems axis considers whether or not change is inherent to natural processes.

Is there really a balance of nature—notwithstanding its many profit-oriented and eco-activist invocations? This is not just an academic question for environmentalists, as it profoundly relates to how we view human impacts, our goals for ecological restoration, and ultimately the place of humans on Earth.

We all know from geology that the Earth has changed in many ways before people arrived on the scene; that much is not controversial and has been long documented, with ecosystem effects detailed via the field of palynology (e.g., Davis 1969). But what about changes more on human timescales? Typically we think of those wrought by human forces, such as the longstanding reality of deforestation or the more recent reality of anthropogenic climate change. These very significant human impacts could lead to the conclusion that change—especially change for the worse—is always of human origin, and that Earth and its ecosystems would otherwise remain in a state of equilibrium and harmony if human impacts were eliminated.

Indeed, some classic notions in ecology seem to favor this balance of nature thesis. One is the idea of ecological succession and the related concept of a climax community. Succession is often presented via the example of a forest, starting with major disturbance such as fire that removes the forest and effectively starts the cycle of succession via early seral stage species. In time, succession is understood to produce a stable, climax state dominated by later seral stage species and effectively in equilibrium until another major disturbance arrives. The overall picture, then, is one in which equilibrium is the rule and disturbance the exception—and at any rate, equilibrium is eventually restored following disturbance.

More recent approaches to ecology, however, have stressed disturbances as integral to the structure and function of many ecosystems. Here, change is the rule and stasis the exception, as a wide range of biophysical processes—fire, weather events, earthquakes, insect outbreaks, etc.—result in episodic or recurrent drivers of change. Following these approaches, ecosystems and their constituent species are thus continually in a state of dynamic response to disturbance.

The resultant picture emanating from disturbance ecology (Meurant 2012) and related work in nonequilibrium ecology (Rohde 2006) pose a fundamental threat to the longstanding assumption of the balance of nature. As one early commentary, titled “The nonequilibrium paradigm in ecology and the partial unraveling of environmental law” (Tarlock 1994), summarized this challenge:

Legislators, regulators, resource managers, and lawyers have derived a powerful and general lesson from ecology: Let nature be.…Legislatures and lawyers enthusiastically embraced [the equilibrium/balance of nature] paradigm because it seemed to be a neutral universal organizing principle potentially applicable to the use and management of all natural resources.…Twenty-five years after this paradigm was incorporated into law, it…is now unraveling (pp. 1121-22).

Yet it would be a mistake to assume that ecosystems are simply in a state of constant, random flux. These trends in ecology have led scientists to more precisely define what stability would mean in ecosystems (e.g., Pimm 1991). One comprehensive literature review, aptly titled “Babel, or the ecological stability discussions” (Grimm and Wissel 1997), included fully “…163 definitions from 70 different stability concepts and more than 40 measures” (p. 324). What emerges from this rich literature is, first, a critique of any simple notion of stability in such a complicated, multifaceted reality as an ecosystem; and second, a variety of ways to characterize dynamic patterns in ecosystems.

Another important implication involves work by ecologists on the dynamic notion of resilience, which they view as more helpful than concepts (e.g., sustainability) grounded in an equilibrium approach to nature. Resilience gets us back to the practical significance of change: if indeed disturbance and nonequilibrium—whether due to anthropogenic or biophysical drivers—are a part of Earth and its ecosystems, then how do we manage ecosystems to ensure that these changes do not result in degradation? A wide range of theories, publications, research efforts, and conferences dedicated to resilience, grounded in classic work by ecologists (e.g., Holling 1973), suggest possibilities to care for Earth and its ecosystems without resorting to earlier notions of the balance of nature, yet with appropriate attention to changes of concern, such as catastrophic shifts in ecosystem regimes (Sheffer et al. 2001; Sheffer and Carpenter 2003).

Ultimately, this discussion suggests the need for us to grapple with the reality of change. Certainly, change has occurred in ecosystems as a result of human causes (Vitousek et al 1997; Nelson et al. 2006). As one of many examples, anthropogenic drivers are changing ocean ecosystems in fundamental ways (e.g., Jackson et al. 2001; Orth et al. 2006; Halpern et al. 2008)—yet biophysical drivers are still evident (diLorenzo et al. 2008; Yasuhara et al. 2008).

The reality of change may mean that human impacts on Earth and its ecosystems can certainly be, but are not always, negative; that ecological management may involve more than just returning ecosystems to some stable, preexisting state of equilibrium; and that dynamic concepts of ecosystems such as resilience suggest a different, more active, positive role of humans on Earth.