Note: Some links on this page may be to archived resources.
Though they are potentially useful, they are not fully functional.

Environmental scholarship is about connections…the connections that matter. It’s easy for environmentalists to say “everything is connected to everything else” (Barry Commoner), but this doesn’t tell us how and why things work, and how we can possibly influence or change things. Our ENVS Program encourages students to focus on the relations between issue-specific actors and processes that connect these agents in networks, in an approach broadly known as actor-network theory or ANT, so that we can better understand—and hopefully change!—the world. 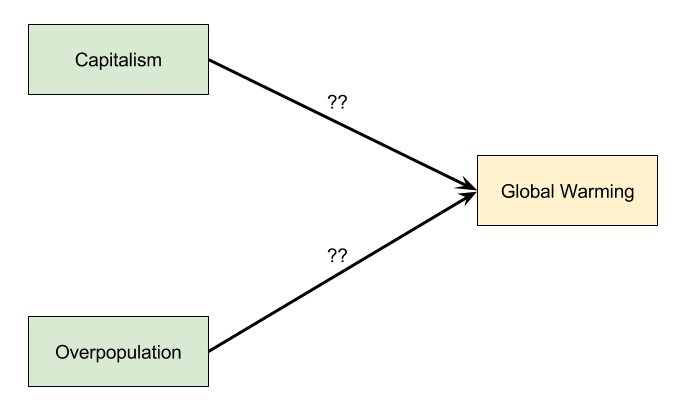 Let’s start with, well, a bad actor-network map. This map summarizes how people often talk about climate change: they call it something general like “global warming,” and they attribute it to just one or two vague causes, like “capitalism” or “overpopulation,” without specifying exactly how these causes result in global warming (thus the “??” labels). Also, note how the only actors are humans (capitalism and overpopulation); the nonhuman component (climate, or “global warming”) is simply acted upon; this is a no-no in actor-network theory, which includes nonhuman as well as human actors. So, here are some key conceptual problems with this actor-network map:

It is possible for the above actually to be a useful, if bad, ANT map, in that it can reveal our vague understandings about things—here, that capitalism and overpopulation are somehow responsible for global warming. As a good direction, then, to take your ANT maps, try to go from more general to more specific actors and processes as your understanding of a phenomenon improves.

Now, let’s consider a better (not perfect!) actor-network map; this one is of a few key actors and processes shaping the Columbia Slough in Portland, Oregon, a watershed known for extensive industrial development and low-income settlement as well as a series of Slough channels and related habitat. One important challenge in the Columbia Slough, given its historical role as a floodplain of the Columbia River, is to keep water from infiltrating the many warehouses and other industrial establishments (as well as Portland International Airport!) located there; this will be the basis for our ANT map, as it defines many of the more powerful actors in the Slough.

Though it’s possible to do a reasonable actor-network map at larger scales, a situated context such as the Columbia Slough can really help. Let’s note some key strengths of this ANT map, first contrasting it with the map above:

This is not a perfect Cmap: for instance, a focus question, to help the viewer appreciate exactly what this Cmap attempts to clarify, would be helpful. But it does avoid some of the big problems (e.g., vague concepts, no processes, tired distinctions) noted in the Cmap above.

Here is another quick example of a situated ANT map, focusing on eutrophication in Lake Victoria via a portion of the documentary Darwin’s Nightmare.

Here are some apps to consider as you make a concept map of actors and processes:

When done, share your ANT map with others. Does it visually communicate the reality of your issue or topic? What questions does it evoke in others? Use this feedback to improve it.

Here, then, could be the elements for you to include in your actor-network maps, with a score for each (10 pts possible).

You may also be asked to submit a brief text summary of your actor-network map. A good textual summary (10 pts possible) would include an embedded ANT Cmap (see concept mapping help page to embed your live Cmap), and conveys:

Mapping actors and processes is hard work—just as hard as writing a good paper. For many students, though, this visual exercise can be immensely rewarding.